How To Trade With Confidence 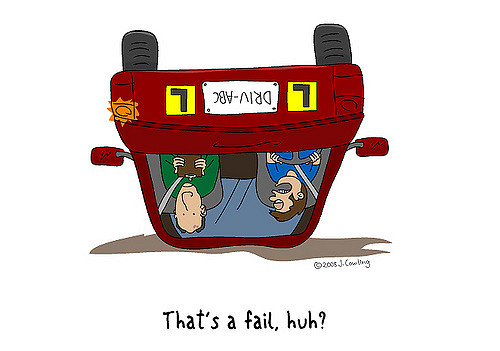 Trading with confidence is not as simple as the saying it is.  I often compare learning to trade to learning how to drive a car. The risks, potential for freedom and skill required make the activities pretty similar in some respects.

Here's a conversation I've had more times than I care to remember...

While most drivers first learn to drive and then settle into a natural, almost intuitive confidence when driving, most private traders never get to an analogous point in their trading.

Faced with increasing frustration and, oftentimes, mounting losses many would-be traders leave the markets altogether becoming a member of that enormous group known as "failed traders."

So what accounts for the resulting (and oft quoted) statistic that 90-95% of short term traders fail? More important, is it even possible to join the minority of consistently profitable traders? How can we trade with the same confidence we experience when driving or doing some other rote activity? To answer these questions, let's take a look at how we transition from a frightened, new driver to a confident, experienced one.

I bet you barely remember the terror you felt when you first began learning to drive. The act of driving was likely somehow very different from what you’d imagined...
While you may see yourself in some or all of the descriptors above, one thing is for certain...driving was not as easy as it looked.

Now imagine if, on that first day, your driver's ed teacher said, "Drive with confidence. You have to act with certainty when driving."

Confident was almost certainly not what you felt.

Fast forward a few months... You'd taken and passed Driver's Ed. You'd even obtained your license. You'd taken solo trips to the convenience store 3.78 miles away without further destruction of your beaten up 1973 Chevelle.

You'd reached a level of comfort.

Fast forward two years... You were the new epitome of cool. You handled that Chevelle like the pro you were.

You named her Shirley.

You and Shirley had made trips all over the place together... 50, 60 even 100 miles one way. You'd negotiated windy country roads as well as sped along the Interstate traveling "just a touch" above the speed limit. Your friends suggested driving to a beach a couple of states away...you didn't even bat an eye because you knew you could handle it. You had completed the journey from nervous beginner to self-assured driver.

Fast forward ten years... Driving is now second nature to you. You have driven so many times and over so many distances that you no longer even think about it. You have seen so many different travel and road conditions that you are completely aware of your capabilities and limits behind the wheel. You're an expert.

Now consider your progression as a new trader.

You probably spent a lot of time reading about trading. You read about system trading, spread trading, option trading, DayTrading, algorithmic trading, etc. You even attended trading expos and paid for a few seminars and webinars. The writers and teachers always had a way of explaining things that made it clear just how easy it would be if you committed and applied yourself.

You decided trading was for you. Of the many types of trading, you decided Day Trading was the way for you to go. You purchased several more books on the subject and immersed yourself. You discussed it with your wife and got her on board. You wrote a business plan and a trading plan just as the books suggested. You opened a brokerage account with a broker who focused on Day Traders. You decided on a few choice setups and back tested them. The results were promising. You purchased a new computer and monitors and set up your office to reflect your new undertaking. You installed your broker's trading software.

On the following Sunday evening you ran your scans for potential trade setups for Monday. Your scans delivered tons of potential candidates. You culled them down to a few and went to bed. You couldn't sleep. You tossed and turned for most of the night then practically flew out of bed at 5am. You wanted to get an early start on reading the news and seeing what the foreign markets did overnight. There was no important news on Merger Monday surprisingly, but no matter...you had your tested setups in hand.

I could continue this story, but it is all too familiar. You know how it went.  Whether you made or lost money that first day (or week for that matter) is of no consequence.

Generally, within a few weeks, you've lost a substantial portion of the capital he allocated to trading. Within a few more weeks (months if you're lucky) you've blown out the account, added money to the account or, if smarter than the average bear, gone back to the drawing board. I'm not sure what the average tenure is these days, but certainly inside a year (no more than two), you've moved on.

Trading With Confidence - The Difference

Why the difference in outcomes between trading and driving? The would be trader certainly completes more prep work than the novice driver. So why, at the end of two years, will one newbie have safely arrived at the intermediate level while the other newbie will have thrown in the towel?

In a word, practice.

It may be argued that trading requires more skill than operating a car. But it may not be argued that it requires significantly more. Both take time and practice to learn. Both offer rich rewards and freedom to those who become competent.

The individual actions required to perform each skill are simple, but in both cases actions must often be performed simultaneously. There are significant risks inherent in both activities. Finally, as with most any endeavor, the more one performs the required actions, the better one becomes.

The neophyte driver goes from driving with a relative around the neighborhood, to driving to the local convenience store, to driving longer distances. He does this over time and as his skill level increases. He doesn't read a driver's manual then jump in a late model car to test himself on the closest interstate.

The neophyte trader while taking some time to back test his ideas, jumps right into the thick of trading without so much as a week spent watching the market trade day in and day out.

Without painstakingly recording paper trades to begin getting a feel for market behavior...

Without working with his broker's simulator (if one exists) to develop an understanding of how the software works and whether it has any nuances of which he should be aware...

Without paper and simulator trading any of his ideas before going live to make sure the results match the back tests...

Is it any wonder he failed?

If you remember nothing else from my rambling here, remember this, ALL confidence is developed. None of us are born with preternatural confidence.

We may have it instilled at an early age and thus feel that we can do anything, but it is not a natural part of anyone's psyche from the moment they enter the world. Those people you know who exude confidence, who have beaten back worry, who are at ease everywhere and all the time, acquired their confidence, every bit of it. It did not come naturally.


Trading With Confidence - The Answer

In my opinion, it takes several years of virtually uninterrupted screen time to develop real confidence as a trader...preferably watching a single or just a few securities trade day in and day out. Getting to know how they trade on normal days...how they trade around both stock specific and non stock specific announcements...whether they tend to be highly correlated to the larger market or contra indicated...how wide the intraday spreads are...who the main players are (institutions or individual traders)...what the normal intraday ranges are...today's, yesterday's, last week's and last month's important levels and how the security acts around those levels, etc. While constant learning from books, seminars and the like is important, the supremacy of simple screen time cannot be overstated. This is the only way to truly develop the trading confidence to which every trading mentor (myself included) refers.

Once developed, the trader can then deploy her skills across virtually any volatile, liquid security successfully. As long as a simple, robust strategy is the method, she will find herself perpetually and truly confident...and, most important, profitable.
Posted by The Trader
Email ThisBlogThis!Share to TwitterShare to FacebookShare to Pinterest
Newer Post Older Post Home