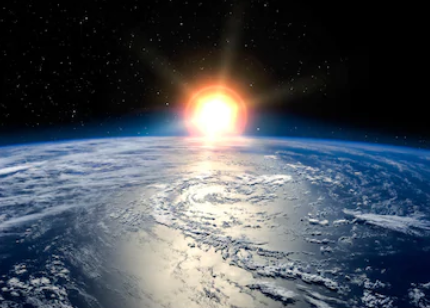 "You never know with these things when you're trying something new what can happen. This is all experimental."
--Sir Richard Branson
=====================
Amid market concerns about the impact of the new coronavirus, at least one stock has been showing signs of not really giving a damn: Virgin Galactic Ticker: SPCE. The stock is up 162% this year after going public last October.

The company's shares have moved higher for the past seven trading sessions, leaping 21% last Friday and gaining another 5.7% yesterday when US markets reopened following Monday’s federal holiday.

Trader’s Heads Up: The daily chart looks to be forming a Shooting Star pattern. Watch to see if the pattern is confirmed by trading below yesterday’s low. 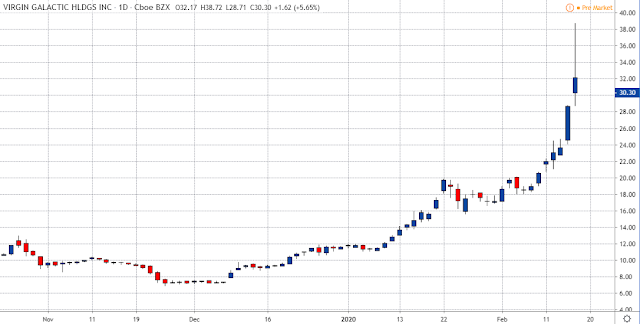 What's up: This is a classic pile in… Investors are increasingly optimistic about Virgin Galactic's plans to launch a commercial space service. The company announced last week that it relocated its SpaceShipTwo suborbital plane, also known as VSS Unity, to its commercial headquarters in New Mexico. That apparently brings the company one step closer to eventually launching paying passengers into orbit.

The catch: Virgin Galactic is not profitable and is expected to continue losing money through 2021.

Plus, the company hasn't issued a quarterly financial report since going public. That raises the stakes for fourth quarter results coming February 25.

There could be an interesting trade setting up here (trend notwithstanding).  Watch for confirmation of the Shooting Star short signal.

Update Post Close 18 February 2020:
You could say this is why it's important to wait for confirmation (here for price to breach Tuesday the 17th's low) and/or why it's imperative that traders use stops no matter what... especially if you have a tendency to "jump the gun" on trades.

The setup here remains intact... and will be so unless and until yesterday's high is breached.  Some traders would take the next break of a low (assuming no high breached) as a trigger... especially given today's inside bar.  But I think the better plan is to wait patiently for the Shooting Star pattern to trigger... or for the setup to be nullified. 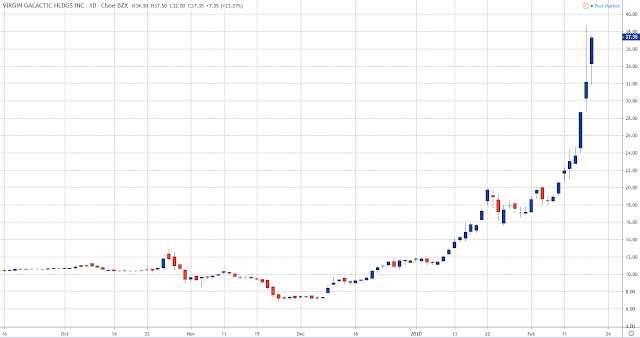 For what it's worth.