4 Reasons The S&P 500 Continues To Rally In A Declining U.S. Economy

These are strange times folks…

The US stock market (as reflected by the S&P 500) is up more than 25% since the March 23rd low while unemployment likely surged well above 20% last week based on the most recent data. How does one reconcile these opposite directions? 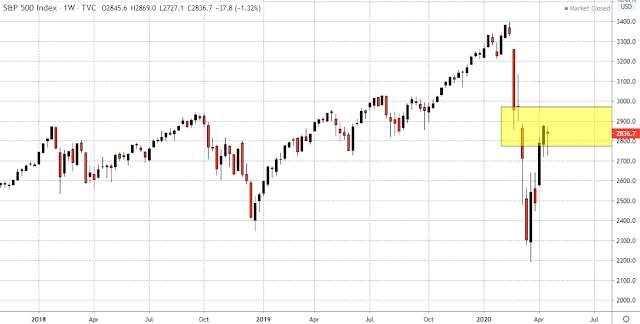 I think there are 4 things worth considering. I’m sure there are likely many more reasons, but these strike me as particularly relevant.

Technology [22.18%], communications [10.74%] and healthcare [15.55%] stocks now represent just under half the S&P 500. As a rule, given what they do, how they’re structured and from whence they receive their revenues, the companies in these sectors are impacted the least by COVD-19… in fact, some are even benefiting.

For example, at a 22% weighting tech is the dominant sector in the S&P 500. Within that, just 3 tech companies, Apple, Microsoft and Amazon, make just under 15% of the S&P 500. That makes those 3 names alone nearly five times more heavily weighted than the whole energy sector [2.65%]… or almost double the weight of the industrial sector [8.7%]. 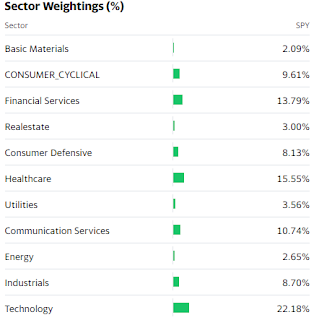 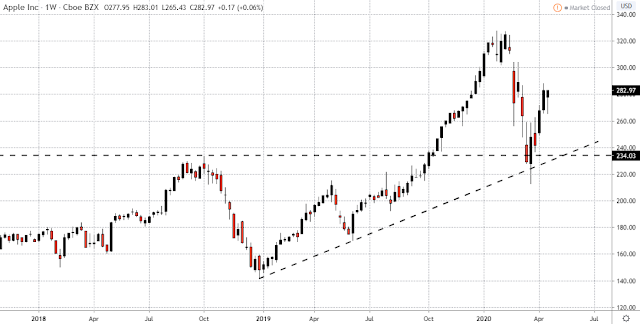 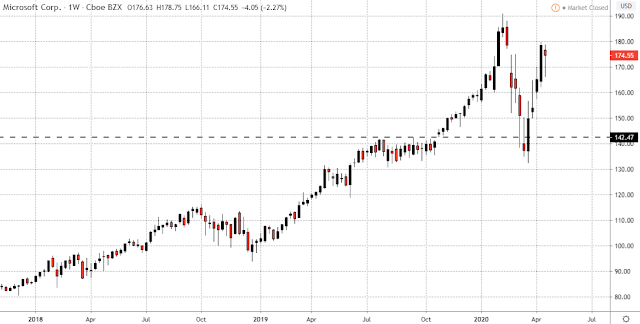 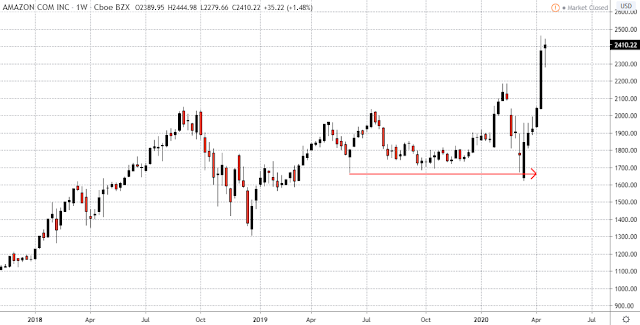 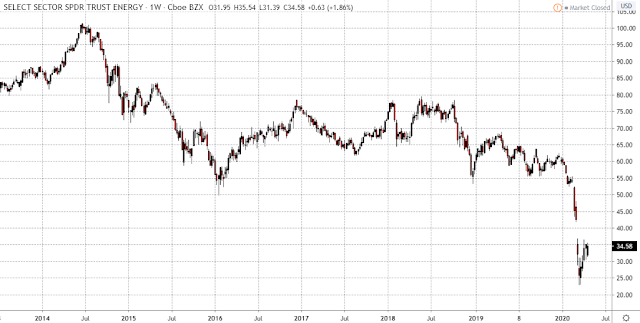 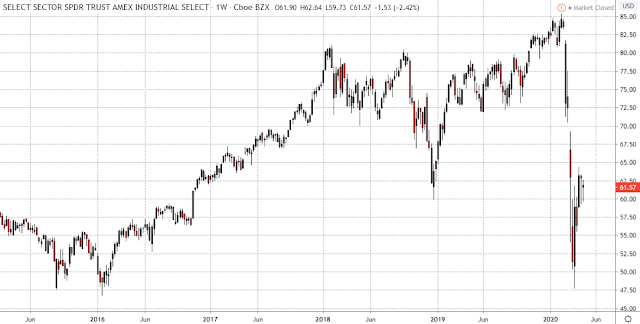 Thus, as currently constructed, the S&P 500 is far more sensitive to moves in the tech sector than other sectors of the economy like the noted energy and industrial sectors. So you see the S&P 500 benefitting from the rise of tech stocks, which have held up far better than other companies during the COVD-19 crisis. Incidentally, the tech-heavy Nasdaq index is now mostly flat for 2020. And because tech companies are a much smaller component of the overall U.S. economy, the stage is set for a tremendous divergence in the performance of the “real” economy relative to the S&P 500 index.

The story is the same with healthcare and communications stocks. Significant components of the S&P 500, much less so re the overall economy and doing pretty well with traders, so the above noted divergence between the real economy and the stock market is further broadened.

The S&P 500 increasingly contains international businesses. They are listed and generally headquartered in the U.S. but sales are global. In fact, as of August 2018, 42.9% of the revenues of S&P 500 companies came from outside the U.S. And that number has been north of 40% since at least 2008. As such the S&P 500 increasingly follows the global economy more than the U.S. economy.

So… even though the data is still coming in and COVID-19 responses continue to evolve, the U.S. may be seeing a worse economic impact from COVID-19 than certain other countries… since the S&P 500 is only partially focused on the U.S., revenues from off shore may be acting as a hedge against falling U.S. revenues.

The stock market is a discounting mechanism… i.e., it’s forward looking, which means it reacts to forward looking prospects of underlying companies. For most companies valuations derive from examining 10 to 40 years of future earnings. Hence traders like to look through times of economic weakness to a large degree.

For example in the past recession the S&P 500 bottomed in March 2009 but the recession did not officially end until June 2009. The market turned long before the economy made it clear things were on the mend.

The market is clearly looking through the current weakness. The market’s view appears to be a combination of optimism that the government response and the Fed’s actions will reduce the economic hit and sustain asset price valuations and that the necessary actions to contain COVID-19 will be effective and relatively short-lived.

Of course, that’s not to say the the market is necessarily correct in that view, but it’s fair to say that the market sees an optimistic path through the crisis relative to where we are right now.

All of the foregoing... index weightings, international exposure and the forward looking nature of markets are impacted [indeed exacerbated] by the concept of liquidity.

In business, economics or investment, market liquidity is a market's feature whereby an individual or firm can quickly purchase or sell an asset without causing a drastic change in the asset's price. Liquidity is about how big the trade-off is between the speed of the sale and the price it can be sold for. Via Wikipedia

This concept is important for financial markets [if a bit convoluted], but here’s a simplified explanation. The United States is credit driven… when credit markets seize up, normal business functions grind to a halt leading to fairly widespread problems since many components of the economy are interrelated [see the Great Recession of 2007-09].

To prevent a collapse of economic activity, central banks engage in a number of activities designed to manage/increase the availability of cash [money supply] when the economy looks set to lock up. In doing this, a lot of “cheap” cash is made available market players and, since cash seeks yield, large sums of money finds its way into stocks [via fund purchases, retail activity and corporate buybacks] which ultimately forces those same stocks higher… thus the saying, “don’t fight the fed.” 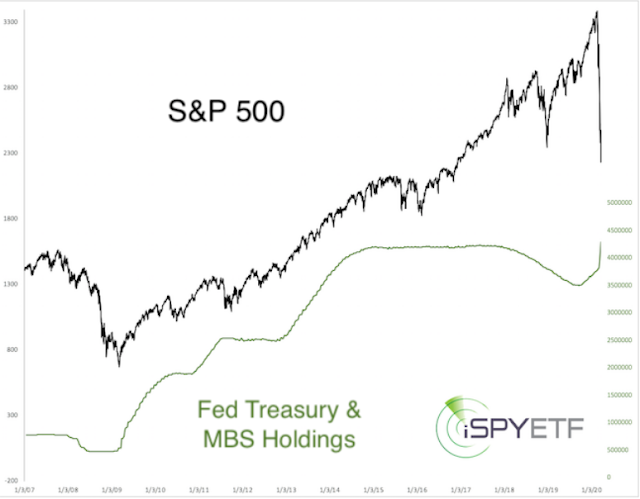 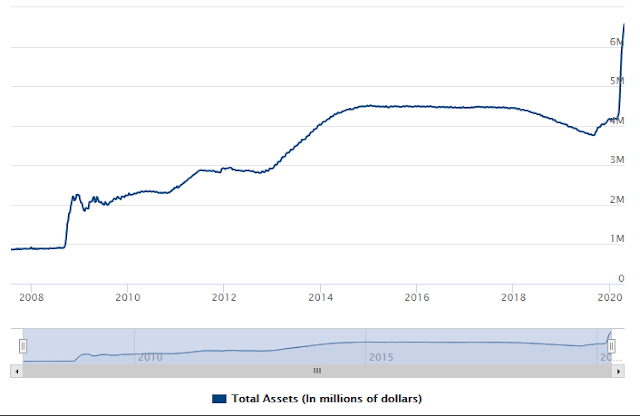 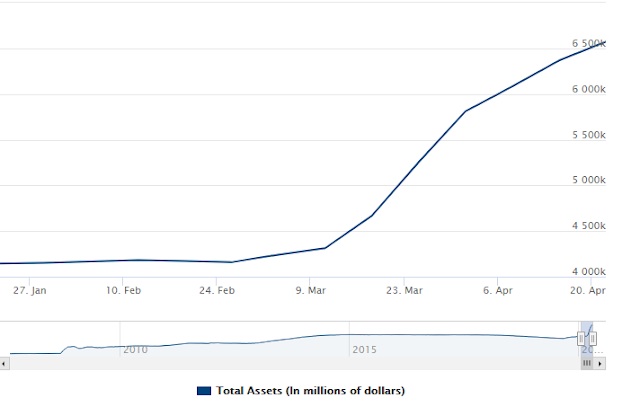 That’s exactly what’s been going on in the U.S. stock market. As the combined chart shows, the S&P 500 has been pushed higher over the years by liquidity inducing behavior from the Fed… note: 1 of the ways the Fed provides liquidity is by increasing its balance sheet via asset purchases. More on that some other time.

We shouldn’t expect the S&P 500 to closely track the U.S. economy. The index is heavily skewed to sectors that don’t necessarily reflect the overall U.S. economy. Secondly, the S&P 500 is now more of an assessment of the global economy than the U.S.

Third, stock markets are simply repositories of the future prospects of underlying companies. And finally, “don’t fight the Fed…”

Will we stay elevated (and continue even higher)?

No one [least of all me] knows the future. But that’s why sticking to a proven, price action based approach is the way to go.