Am I Too Late To The Trading Game? 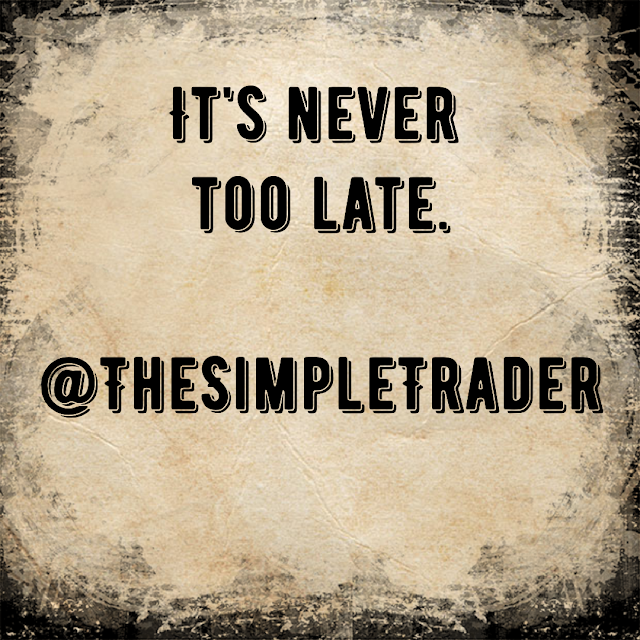 If you're not dead it's not too late.

Don't let the financial gurus, Cramer types and other talking heads convince you that you're SOL because you don't have 30, 40 or 60 years until retirement.

What they don't tell you is that that's the only way THEIR approach works... on paper at least.

Over the years I've had an enormous number of people ask me questions about trading...

"Do I  have to spend all day in front of a computer to do it?"

Below is the essence of a conversation I had with a friend who was one of these questioners. It's the same conversation I've had innumerable times with other folks.

=============
Fred: So I’ve read the literature about saving for retirement. What I want to know is when do I REALLY need to start saving? And don’t give me the same old crap every other person in the financial services industry spouts… that it’s an emergency and I have to "start yesterday."

Trader: I’m not in the financial services industry.

Fred: So you’re not gonna give me that "it’s an emergency" nonsense then?

Fred: Good. So when do I really have to start?

Fred: What does that mean?

Trader: It means before now.

Trader: It means you should have started saving and, more important, trading long before now.

Fred: How long before now?

Trader: From the womb.

Fred: Very funny… How could I have traded from the womb?

Trader: Someone should have been doing it for you before you were born and handed it off to you as a coming of age gift.

Fred: Why is that so important?

Fred: Are you being an ass again?

Trader: Perpetually. But it really is magic…

Trader: It’s the magic of compounding.

Trader: Let’s say someone silly enough to love you deposited $1,000 into a tax-deferred account on your behalf at birth and managed to add an additional $100 each month until handing it off to you in 20 years at which time you continued adding $100 monthly until retiring at 65. Assuming the account earned 1% interest annually for the life of the account what do you think the balance would be worth when you turned 65?

Trader: $81,000 give or take. Now assume no additional monthly contributions, but an 8% annual return on average over the same 65 years. What do you think that would amount to?

Fred: Can you just tell me please?

Fred: But of course you won’t. Okay… so 8% per month, no additional contributions huh? It’s gotta be less right?

Fred: Wow… so what about if we put them both together? Additional $100 monthly and 8% compounded annually.

Trader: No need really... Here…
(Hands Fred a sheet with the information below).

Fred: What is this? Some of your trader tricks?

Trader: Nope… its basic math… and a helluva lot more than you even need to do what I do.

Fred: (after studying sheet) So is that 1.5 million just for having a decent return each year... without adding $100 monthly?

Fred: You’re not a Spanish speaker.

Trader: But I play one on tv.

Fred: What about taxes?

Trader: What about them?

Fred: Don’t all the experts say that tax impact will destroy your returns? Isn’t that reason enough to avoid churning your account? Certainly that and commissions?

Fred: Depends on what?

Trader: Depends on whether you would turn down a promotion at your job because it will increase your pay and thus potentially increase your tax burden. Besides, depending on how you do it, taxes are, at a minimum, deferred.

Trader: Means you wouldn’t have to worry about them for a long time.

Fred: Ok.. Well, all the professionals say anything north of 7% consistently is a pipe dream.

Trader: I smoke a different pipe. Actually, I smoke cigars.

Trader: I’m saying you should make more than that.

Fred: And how exactly would you propose I do that? 12% per year is 1% per month.

Fred: WHAT? Are those more of your trader tricks?

Trader: Sure it can. It’s ok… you can say it… I already know the answer.

Fred: That seems so simple.

Trader: That’s because it is.

Trader: You don’t need them.

Trader: Assuming no additional $ and only 12%/year. You can do better than 12%. And that changes everything. What’s the 2nd problem?

Fred: I assume those returns are from day trading… I don’t have the time to do that.

Trader: Those returns are timeframe agnostic…

Fred: What the hell is agnostic?

Trader: Careful with such language… My ears are delicate. Agnostic just means the returns are not specific to 1 way of trading. If you have a profitable process and minimize your risk at every turn, you should be able to double your account annually without too much difficulty…

Fred: WHAT? How would I do that?

Trader: So sorry… Gotta run... Ciao...
==================
I was a bit of a wiseass with my friend... But "facts is facts."
If you want to know more, check out this eye-opening lesson.
Posted by The Trader
Email ThisBlogThis!Share to TwitterShare to FacebookShare to Pinterest