“Looked For Money Can’t Be Found”
One of the major sins new traders commit is expecting (needing) to make money (on their own) immediately. Rent money… a car payment… tuition… or just money to pay for a well-deserved, likely long overdue vacation, many new traders come to the market with a list of what they want the market to “give them.”

It doesn’t work that way.

While the market is actually not “out to get you,” as your performance may so often make it seem, it also owes you nothing. Further, it is highly unlikely to “give” you anything… certainly not repeatedly anyway.

With all that said however, let’s draw a very clear distinction here… If you are diligently following a plan and executing the same with precision and exactness, there’s a much better chance that you will have early and lasting success.

Let me give you an example of how the search for easy trading profits can (and will) destroy your ability to become a consistently profitable trader.

Several years ago I attended a meetup for local traders and met a young lady we’ll call Terri. Terri was a professional in another field, but was interested in learning and developing a trading side hustle. The meetup was hosted by a guy who purported to be an expert in day trading penny stocks because he had spent a few years on a bond trading desk for a bank. We’ll call him Bob. Bob ran a virtual trading room where he shared “high probability intraday penny stock setups.” Terri was a member of that room. Terri asked me a few trading related questions at that meeting, got my contact information and went on her way.

A few weeks later I received a panicked email from Terri. She said Bob had gotten her into 3 penny stocks to the tune of nearly $20,000 in aggregate and the positions were going against her in a big way. She asked if I would talk to her. Here’s a recap of our conversation.

Terri: “What should I do? These trades were supposed to generate a quick return so that I could do some things I need to do around the house.”

Me: “Have the trades hit your stops?” I asked.

Terri: “Well they went through the stops the day he entered them for me so he said I should just hold over night and they would bounce back tomorrow.”

Me: “I thought you were day trading penny stocks.”

Terri: “We were, but Bob said sometimes it makes sense to hold positions over night to reap the return.”

Terri: “But you haven’t even looked at them.”

Me: “Doesn’t matter… your sole strategy at this point is ‘Hope’. That’s not a consistently profitable strategy.”

Terri: “But I can’t really afford to take the losses.”

Me: “That ship has sailed.”

I ultimately took a look at the names and helped her get out of the trades… at a significant loss.

But she avoided a total loss as 2 of the 3 names were delisted and ultimately went out of business within 3 months.

The point of the story is Terri had no plan, no strategy and she was looking for the market (and Bob) to deliver quick profits for reasons unrelated to the market and the stocks she was trading.

Here’s another example (with a video)…

Several years ago I would hang out at a local watering hole on football nights to watch the game du jour. On one of these evenings I met the buddy of a buddy (we’ll call him Merlin), who, when told I was a trader, did as people often do and asked me about a stock he cared about. He said he bought it because it was a “can’t miss” recommendation from his brother in law and he wanted a little extra headed into the holidays. At that time the stock was down significantly from where he bought it so he was trying to decide what to do. Here’s a recap of our conversation…

Merlin: “What? You haven’t even looked at the stock. I thought BJ said you were a chartist.”

Merlin: “That doesn’t make any sense… why would you just say sell it without even looking at the chart?”

Me: “Well… the stock is down significantly… that’s reason enough. What’s worse is you bought it with no strategy and obviously no stop.”

Me: “Oy. A stop is sometimes referred to as the ‘Oh Shit’ point. It’s the price where you accept that you were wrong about the idea… at least for the moment… and you get out of the trade to preserve your capital. When a stock hits your stop, you’re no longer worried about making money… you’re trying to avoid losing more.”

Merlin: “Why would I just accept a loss? As long as I hold on to it, there’s at least a chance that it will reverse and go higher right?

Me: “True… but there’s also a chance that it will go even lower and increase your losses further.”

Merlin: “My brother in law says just hold on… in fact, he says he’s buying more to average his price lower.”

Me: “Do you have a good relationship with your brother in law?”

When I got home that night I pulled the stock up and took a look. What I saw gave me a 3rd reason that Merlin should sell the stock. In fact, I never would have bought it in the first place.

I never found out what Merlin did with the stock. But here’s a video I made looking back at the stock.

Do yourself a favor; Stop looking for easy/quick profits. Commit first to not LOSING lots of money immediately. That will help shift your focus to where it belongs... to your risk.


Get that right and the profits can follow much more easily.

The Single Best Investment I Know Of 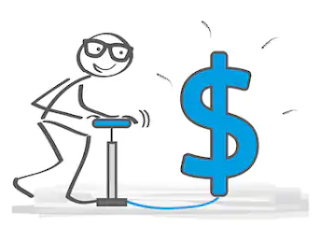 The Trader on Indicators

Get Notified Of New Posts First