Yield Inversion & What It Means For You 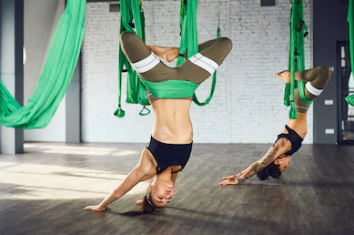 "It's the people who transcend their backgrounds who are interesting to me. I have got a bit of inverted snobbery."

If you’re well versed in economics, you should probably stop reading right now… because this “ain’t” for you…But if you want to know what this talk about inverted yield curve and recession is all about… and what it means for you… read on.

I received a text the other day from a good friend…

“In layman’s terms, what was the recession signal yesterday?”
My first thought was to give a quick simple answer… “Yields inverted…”But then, on second thought, as it was the 4th time I’d gotten the question in 24 hours… I thought I would expand on that answer a bit.What Is An Inverted Yield Curve?Yield is the return an investor gets on a government or corporate bond. It’s the periodic cashflow paid to the investor by the issuer of the bond. Because the periodic cashflows are for a fixed amount, the price of the bond and the yield on the bond are inversely correlated.  If the bond trades at a higher price, the yield falls. If the bond trades lower, the associated yield moves higher.
Translation: In inverted land it's cheaper (lower yield) for companies to issue debt for longer periods than shorter periods.Example:If a bond pays $2 in interest let’s say and the bond itself trades up from $103 to $113… the bond’s yield moves down from 1.94% to 1.77%Typically, investors demand higher yields from longer-term bonds to compensate them for the higher risk of tying up their money for a longer period of time. Makes sense right? If you buy a bank cd the only thing that might make you purchase a 12 month vs a 3 month is a sufficiently higher yield on the 12 month.Professional bond investors are the same.When yields on some shorter-term bonds rise above those on longer term bonds — as is currently the case — they’re said to have inverted. This has historically signaled a pending recession. 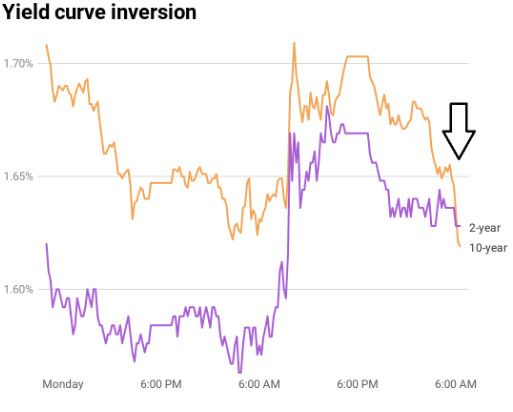 Why Do Yields Invert?


One big reason inversions happen is because investors are selling stocks and shifting their money to bonds. They’ve lost confidence in the economy’s ability to grow and thus the likelihood that stocks will move higher. They believe the meager returns that bonds promise might be better than potential losses they could incur by holding onto stocks in a slowing economy. As large investors shift (reallocate) from stocks to bonds to reposition for a slowing economy, they often move into longer term US Treasuries versus shorter term bonds… and drive the yields on longer term bonds below those of shorter term bonds. But why does that suggest an impending recession?The truth is no one knows exactly why yield inversion leads to recession other than history… and maybe a bit of self fulfilling prophecy. Historically, the yield curve has inverted roughly 14 months before each of the past 9 US recessions. Additionally, a slowing economy has a tendency to take on a life of its own as business owners pull back on investing in their businesses.What Should You Do?There really isn’t much that you can do… Nor that you should do. Given that a recession simply means a slowing economy, i.e., a decline in economic activity, lower job creation, etc., the effect on the average person is not always obvious. That said, there are steps that you can take to batten down the hatches as it were.
No one knows for sure when the next recession will show up… only that it will… eventually. When it does, relax, breathe and soldier on. You’ll come out the other side before you know it.