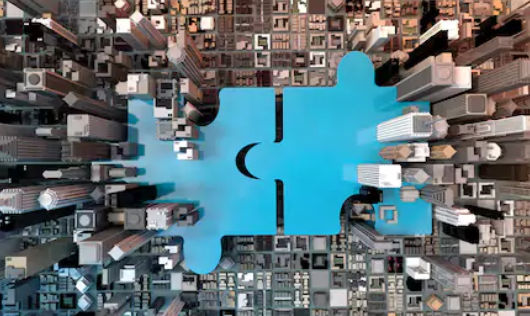 "The trouble with wedlock is that there's not enough wed and too much lock."
--Christopher Morley
=====================
Morgan Stanley said today it’s buying discount brokerage E*Trade Financial Corp in a deal worth about $13 billion. It’s the biggest acquisition by a Wall Street bank since the financial crisis of 2008/9.

This move is part of a broader consolidation in the discount brokerage sector. Morgan Stanley hopes the move will add depth and breadth to Morgan Stanley’s wealth management unit, a business that Chief Executive Officer James Gorman has been trying to build out to insulate the bank from weak periods for institutional trading and investment banking.

Morgan Stanley’s main rival, Goldman Sachs Group Inc, has also been forging ahead with an upstart retail bank, while others including Bank of America Corp and UBS are trying to focus on basic lending and wealth management services.

Big banks have been emboldened to do deals that would have been tricky for the Wall Street titans under President Barack Obama’s administration.

In March last year, U.S. regional bank Fifth Third Bancorp’s purchase of smaller rival MB Financial Inc for $4.7 billion got a nod from regulators. It was followed by approval for a $28 billion marriage of BB&T Corp and SunTrust.

Gorman sounded confident that the deal would go through without any regulatory hurdles.

“We wouldn’t be entering into this (the deal) if we didn’t think from a regulatory perspective this would be viewed favorably,” said Gorman.

Banking deals in particular had languished after the financial crisis as strict capital and liquidity rules were imposed on lenders with more than $50 billion in assets, making it unattractive for mid-size firms to acquire more assets.

In an interview on CNBC today, Gorman said he’d attempted to buy E*Trade twice - in 2002 when he was at Merrill Lynch and then again in 2007 at Morgan Stanley - before re-initiating talks late last year and finally sealing the deal.

Since taking over Morgan Stanley a decade ago, Gorman has pulled off multiple big acquisitions. He orchestrated the bank’s takeover of Smith Barney, making wealth management the cornerstone of his plan to stabilize revenue.

E*Trade, which became popular nearly 20 years ago with commercials that blasted financial advisers for high fees, had been under the gun as the online trading space became more competitive with increased cut-throat pricing and falling volumes due to the rise of exchange traded funds.

Revenue growth at the brokerage, like at rivals, has taken a hit in recent years from the emergence of digital upstarts called roboadvisers grabbing the low hanging fruit, falling commissions and lower interest rates, prompting consolidation in the sector.

Morgan Stanley will get E*Trade’s more than 5.2 million client accounts and $360 billion of retail client assets, and the brokerage’s CEO, Mike Pizzi, will continue to run the business following the merger.

If' Im right and this is just a pullback by MS, it may be a good opportunity to enter on a swing basis in anticipation of a move higher. 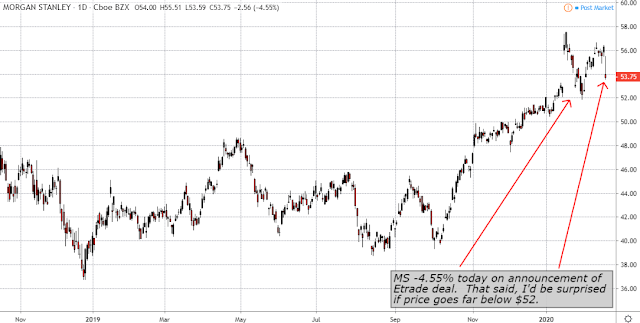 Looks like a pretty good deal when viewed through the prism of a recent chart.  But when you step out further, you see that E*Trade's chart doesn't look so great. 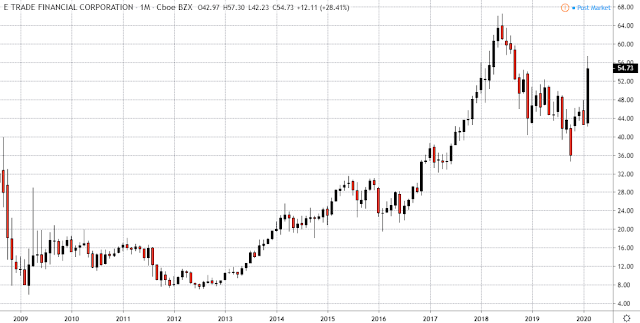 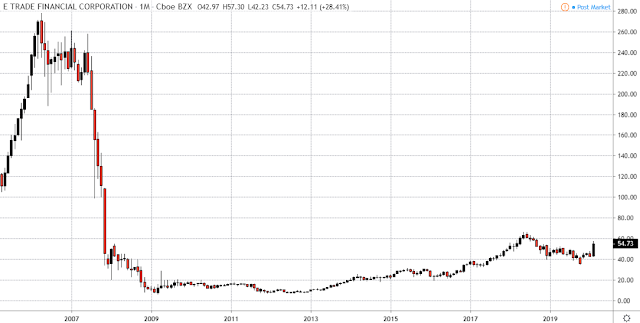 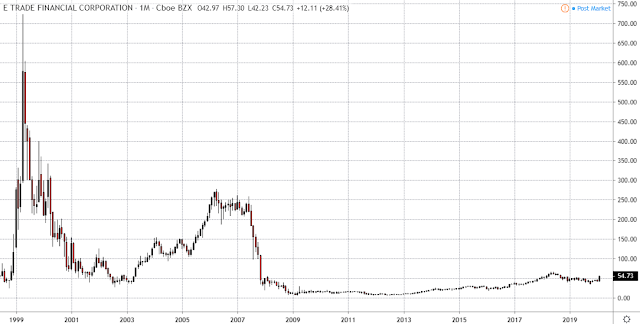 E*Trade shareholders will get 1.0432 Morgan Stanley shares for each share as part of the deal. That translates to $58.74 per share - a premium of 30.7% to the last closing price of E*Trade shares.

The deal is expected to close in the fourth quarter of this year.
Posted by The Trader
Email ThisBlogThis!Share to TwitterShare to FacebookShare to Pinterest
Newer Post Older Post Home